Chimney Sweeping Saltdean
We sweep – We clean – We leave

Saltdean Chimney sweep Mark Styles is insured against any liability of chimney sweeping work and covers the Saltdean area.

Saltdean is a coastal village in the city of Brighton and Hove, with part (known as East Saltdean) outside the city boundary in Lewes district. Saltdean is approximately 5 miles (8 km) east of central Brighton, 5 miles (8 km) west of Newhaven, and 6 miles (9.7 km) south of Lewes. It is bordered by farmland and the South Downs National Park.
Content is from Wikipedia and therefore under copyright. This is the link to the author’s history page.

Saltdean was open farmland, originally a part of the village of Rottingdean, and almost uninhabited until 1924 when land was sold off for speculative housing and property development. Some of this was promoted by entrepreneur Charles W. Neville, who had set up a company to develop the site (he also eventually built nearby towns Peacehaven and parts of Rottingdean). 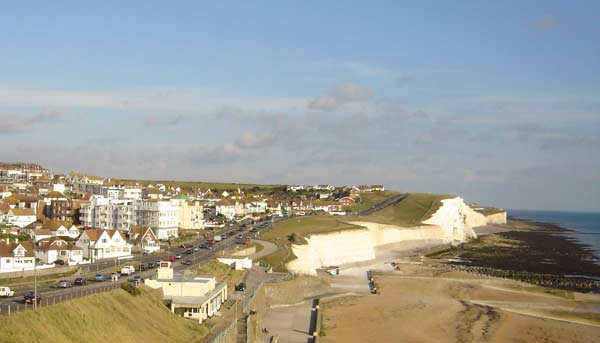 Saltdean has a mainly shingle beach, fronted by a promenade, the Undercliff Walk, which can be reached directly from the cliff top, by steps from the coast road, or by a subway tunnel from the nearby Lido. The buildings nearest the beach are the most architecturally varied, and include some influenced by international trends of the inter-war years, e.g. Bauhaus and Cubism, and there are some which are Spanish influenced.

Saltdean is now a prosperous village suburb of the city of Brighton and Hove, whilst its eastern side is administratively part of the neighbouring Lewes District Council.