Chimney Sweeping Burgess Hill
We sweep – We clean – We leave

Our family-run Burgess Hill Chimney Sweep business is insured to sweep open fires and multi-fuel stoves (gas, coal or oil). We are a professional and friendly company and offer:

Clean and sweep, your Burgess Hill chimney sweep, will make sure that the job will be professionaly done to your expectation.

Burgess Hill is a town and civil parish located in the Mid Sussex District of West Sussex, England, close to the border with East Sussex, on the edge of the South Downs National Park. Located 39 mi (63 km) south of London, 10 mi (16 km) north of Brighton and Hove, and 29 mi (47 km) east-northeast of the county town of Chichester, it occupies an area of 3.7 sq mi (9.6 km) and had a population of 30,635 at the time of the 2011 Census, making it the fourth most populous parish in the county (behind Crawley, Worthing and Horsham) and the most populous in the district. Other nearby towns include Haywards Heath to the North East and Lewes, the County town of East Sussex, to the South East.

Burgess Hill is predominantly situated just on the West Sussex side of the border dividing the two counties, although parts of the World’s End district in the North East are across the county boundary in the Lewes district of East Sussex. 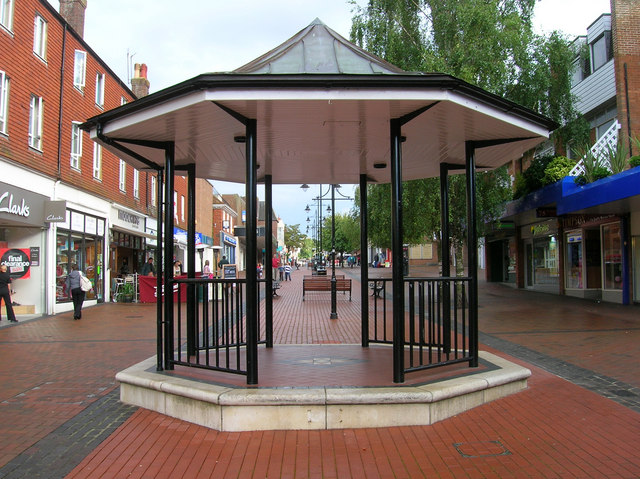 Picture of the Church Walk, taken from the Bandstand, Burgess Hill, taken by Simon Carey and placed on the geograph website under a Creative Commons License. The image can be seen at http://www.geograph.org.uk/photo/226670 (accessed 02/04/07)Simon Carey, CC BY-SA 2.0, via Wikimedia Commons
Copyright by Simon Carey.

The town continued to grow, experiencing its largest population increase between the years of 1951 and 1961, when the population of about 7,000 residents almost doubled. This earned Burgess Hill the title of fastest growing town in the South East. By 1956, the Victoria Industrial Estate was completed, and has since expanded. It now contains the British headquarters of two substantial international companies. In 1986 a smaller industrial estate in the North of the town developed, known as Sheddingdean Industrial Estate. Both Sheddingdean and Victoria have now been renamed as business parks.

In the seventies and eighties several new housing estates were built, namely the Folders Lane estate (formerly known as Oakwood), the Oak Hall Park estate and the Sheddingdean estate. The 1980s saw the largest single development in the town’s history; new housing was created in the northwest of the town with a development known as West End Meadows. Along with this a link road to the A23 was built, easing traffic on the previous route along Gatehouse Lane and Jobs Lane.

Further development took place to the South and West of the Town in the early 1990s. This became the Hammonds Ridge estate (known colloquially as the ‘Tesco estate’ due to its proximity to the supermarket) which was built at the time.

The Triangle, a large leisure and conference centre, was built in the Northwest of the town and opened by the Queen in 1999. In 2005 St Paul’s Catholic College moved from Haywards Heath to their new site opposite the Triangle.

In 2004 Mid-Sussex District Council announced the Burgess Hill Master Plan, a scheme arranged with Thornfield Properties plc to massively redevelop Burgess Hill Town Centre. The Master Plan was part of a larger scheme that would have seen the redevelopment of Haywards Heath and East Grinstead town centres.

The plan would result in the complete reconstruction of most of the town centre, and the redevelopment of the Victorian era train station. However early in 2010 Thornfield Properties was reported to be in financial difficulties and ultimately the scheme did not move forward. Many of the proposed changes were included by New River Retail in their redevelopment plans for the town centre.

As well as the aforementioned developments, there have been two more housing estates built in the town – one in the town’s north east, and the other in the area known as Folders Meadow in the east.

Some of the areas currently being developed are the old Keymer Tileworks and around the south east off Folders Lane. Almost 1000 houses will be built on these sites over the next few years.

Burgess Hill chimney sweeping is coverered in the following areas: